The Chakkri Dynasty (also spelled Chakri), has been the ruling house of Thailand since 1782 (Chakkri Dynasty).  Rama I, originally a military commander with the title Chao Phraya Chakri, became King of Thailand following the execution of the previous ruler, Taskin (Hume, 2018).  Rama I played a very important role in the Burmese-Siamese War.  Once Taskin became King, Chao Phraya Chakri spent almost an entire decade leading Thai armies, in the northern provinces, in order to repel the Burmese soldiers (Rama I).  He helped to establish Siamese suzerainty over Laos, Cambodia, and throughout the northern Malay states (meaning they are unable to take international action unless approved by the Siamese ruler) (Rama I).  Unfortunately, Taskin, who had at one point been a close friend of Chao Phraya Chakri, was thought of as half-insane by many of his close advisors (Rama I).  This sparked a rebellion leading to his beheading, Chao Phraya Chakri assumed the throne soon after.

Rama I was responsible for moving the capital from Thonburi to Bangkok and undertook a revitalization of the Thai institutions of public life (Rama I).  He is accredited with strengthening the Buddhist monkhood by convening a general synod in order to define the orthodox Buddhist scriptures (Rama I).  In addition, he initiated and completed the first codification of Thai law in 1805 (Rama I).  Rama I is remembered fondly by the citizens of Thailand, there is even a public holiday to commemorate him.

“Chakri Memorial Day” is a public holiday, celebrated on April 6 each year, to commemorate the founder/founding of the Chakri Dynasty (“All You Need to Know About Chakri Day”).  While it is a celebration of Rama I, the people of Thailand also recognize other contributions made by previous and current rulers in the Chakri Dynasty (“Chakri Memorial Day 2020”).  The day is celebrated through various religious ceremonies held at the royal chapel.  The King, along with other members of the monarchy, preside over these ceremonies (“Chakri Memorial Day 2020”).  The King also holds a ceremony at Wat Phra Kaew, commonly known as the Temple of the Emerald Buddha, which is considered the most important Buddhist temple in Thailand (“Wat Phra Kaew in Bangkok”).  Within the temple, the King pays respects to his ancestors that reigned before him, they all have life size statues in the temple.  He then lays a wreath at the statue of King Rama I as another important sign of respect. 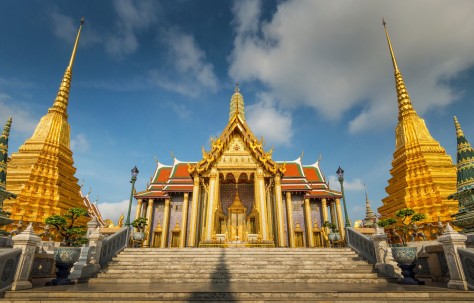 The previous king, Bhumibol Adulyadej, took the throne shortly after World War II and reigned for more than 70 years (Crossette, 2016). He was a unifying figure across the country with his portrait in almost every shop and billboards stating “Long Live the King” expressing the population’s anxiety as his health declined (Crossette, 2016). Bhumibol Adulyadej transformed Thailand during his reign from a mostly agriculture economy into a modernized, upper-income country (Crossette, 2016; Holmes, 2016). After his passing on October 13, 2016, the crowd outside the Siriraj hospital cried and hugged each other (Holmes, 2016). Citizens had been wearing yellow – the king’s color – and pink – the symbol for the monarch’s wellbeing – when standing outside the hospital (Holmes, 2016). The life and Rule of Thailands’s King

Bhumibol met his wife, Queen Sirikit, in Paris and the two were married in 1950, the same year King Bhumibol was crowned Rama IX of the Chakri dynasty (Crossette, 2016). The couple had four children together, three daughters and one son (Crossette, 2016). Their son, Prince Maha Vajiralongkorn, was crowned king after his father’s passing (Holmes, 2016). However, he does not hold the same level of popularity and admiration as his father did (Holmes, 2016). Nonetheless, Thailand has a strict lése-majesté law that makes criticism of the royal family punishable by years in jail, which makes it difficult to determine the citizens’ true opinion of the new king (Holmes, 2016). 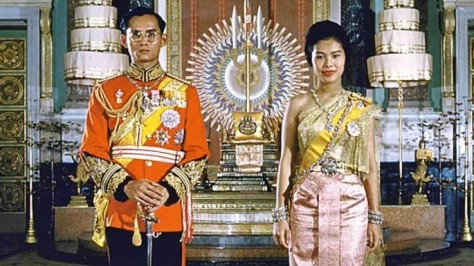 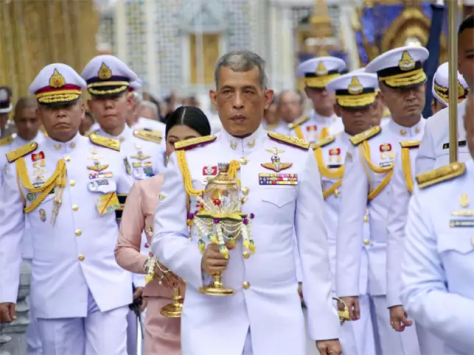 All You Need to Know About Chakri Day.  (n.d.) Thai Consulate General In Vancouver.  Retrieved from https://www.thaicongenvancouver.org/Chakri-Day.htm

Rama I: King of Siam. (n.d.) In Encyclopedia britannica online. Retrieved from https://www.britannica.com/biography/Rama-I