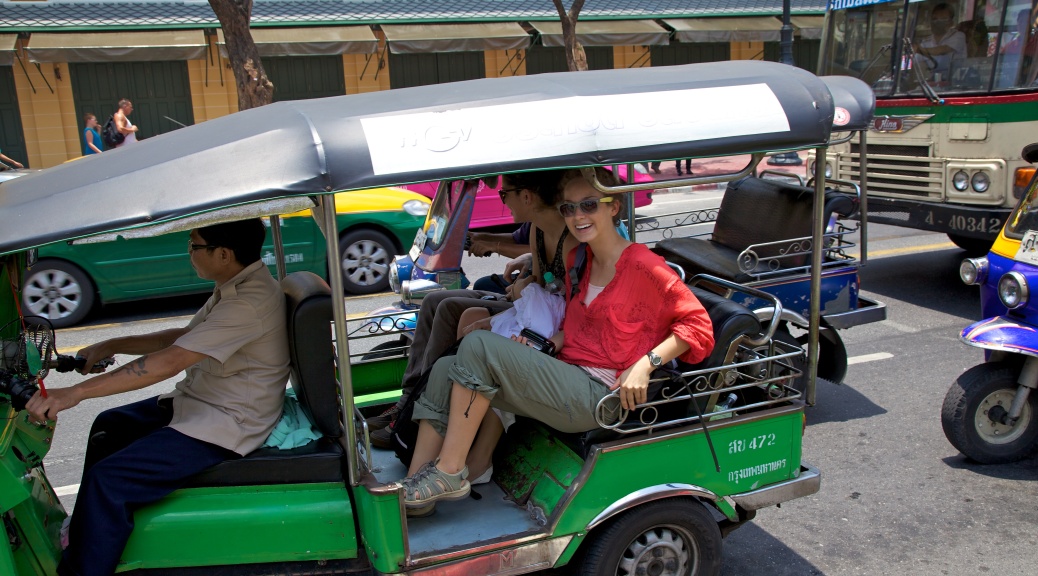 A fear many have about traveling outside of the United States is personal safety. Much of this is ingrained in the fear of the unknown, and not on any firm data. While there are dangerous regions in the world today (Afghanistan, Syria, Iraq, Nicaragua, Yemen, Pakistan), there are many parts of the world that are considerably safer than regions of the US. Thailand in particular is a very safe destination for travel. By many measures of crime and safety rates, Thailand is safer than Canada, New Zealand, Australia, China, Belgium, and far safer than France, Italy, Ireland, and even the United States. And within the United States, places like New York City, Los Angeles, Chicago, and Detroit are far more dangerous than many developing countries.

Of course, no destination is completely safe. However, there are very easy steps to take to minimize the risk of becoming a victim. Many of these steps are ones we take every day when going about our daily lives, but forget to do for some reason when we travel abroad. There are also some other steps we need to take that may not be so obvious, unique to the countries we travel to. Here are some things to remember to assure a safe trip:

One of the primary causes of injuries when traveling abroad is traffic accidents. There are many reasons for this: unique geographies, high population densities, transportation infrastructure that can’t keep up with rapid population growth, increasing wealth resulting in more personal cars, less developed traffic safety standards, mixed transportation modes on roads (trucks, cars, motorcycles, scooters, bicycles, food carts, and even elephants and ox carts all sharing the same road), and various other factors.

Because of this, we used VERY experienced, professional van drivers for our trip. Our van drivers have been with us for more than ten years, and are very experienced in driving in the various cities and countryside of Thailand. Furthermore, when we use other modes of transportation, we will be using the safest vendors possible. For example, we will take a speedboat ride to the island resort at the end of the trip, and the resort-operated speedboats we use are probably the best run operation on the island. Finally, while in Thailand, no student or faculty will drive or be allowed to ride motorcycles. This will minimize the risks during our trip.

The biggest difference between traffic in the US and Thailand is that Thai cars are right hand drive like in the UK, not left hand drive like in the US. Therefore, cars drive on the left side of the road, rather than the right. As a pedestrian, you always have to keep this in mind. Our first instinct when crossing a road is to look to the left first. However, in Thailand, you have to first look to the right for oncoming traffic. 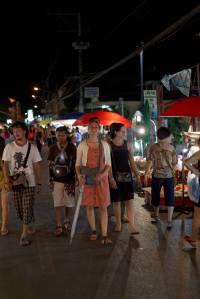 The other significant difference in Thailand (as well as much of Asia) is that pedestrians lack the right of way. Do not cross outside of a crosswalk if you can help it. Do not assume that the cars will stop for you, even in a crosswalk without a traffic light. And always watch out for scooters, motorcycles, and tuk-tuks. The best way to cross a busy street is to cross on an elevated walkway or an underground walkway. Otherwise, cross at crosswalks with a traffic light. If you do have to cross, cross with the Thais; they are used to it, and following their lead will keep you safe.

Furthermore, sidewalks in Thai cities can be challenging. Theoretically, they were designed for pedestrians. But most sidewalks seem like street malls, lined with vendors and food carts, particularly at night. It can be incredibly claustrophobic walking on the sidewalk. It’s tempting to walk out on the street, but don’t. Just learn to be assertive and confident, and deal with the crowds on the sidewalk.

The cities we travel to on May Term Thailand are safe, including Bangkok and Chiang Mai. I feel far safer there than I did in many American cities. However, some common sense will go a long ways towards not becoming a victim.

First, know what to expect. Do some research on your destination. The best source of up-to-date information on country-specific safety issues is the US State Department. They have detailed safety and crime reports for every country. They also send out specific alerts and warnings for countries that are particularly dangerous.

Second, don’t make yourself a target. That means leave anything flashy or expensive behind, and in general not bringing attention to yourself. Keep the expensive watches and jewelry at home, and dress appropriately for the setting. Don’t act out or do anything to bring attention to yourself, be polite and courteous, speak in reasonable tones, and smile. Americans seem to speak at a volume one or two levels higher than anyone else, particularly in Asia. I am also guilty of this. You’re already going to stand out, but if you can minimize your profile, you will stay safer.

Next, realize that Asian cities are far more crowded than Western US cities. For many who were raised in the western part of the US, our sense of personal space sometimes can span yards. In Asia, that space shrinks to mere inches, if that. You will be bumped and jostled when walking. Most of the time, it is inadvertent. It’s something that you have to get used to when traveling in Asia. However, this is an ideal situation for pick pockets. In crowds, make sure your valuables are in your front pockets (including your wallet), and preferably in a zippered pocket or hanging pocket. If you carry a purse, make sure it is held close to you. If you carry a backpack, carry it backwards so that it is in front of you.

Use your phones. Always have them charged, always have some money on them, and carry them with you everywhere. If there is an issue, call Noi or any of the faculty. Communications is probably the best way to avoid getting into trouble.

Finally, use common sense. Don’t go out alone; go in large groups, especially at night. Don’t carry around and definitely don’t flash around large amounts of cash. Always be aware of your surroundings. Don’t take drinks or items offered by strangers. Don’t walk down dark alleys. It’s the same things you would do in any city in America, but we seem to forget to do them when we go abroad.

A word about alcohol:

Irresponsible alcohol use is the primary reason young people find themselves in trouble with locals, or worse, injured, while traveling abroad. We will not tolerate irresponsible alcohol use. Not only does it endanger you, it will endanger the group and negatively affect the reputation of the program and the college. You have all read and signed the alcohol policy statement, and we will strictly enforce it.