By Emily Halliday and Naomi Shapiro

After a four-hour van ride from Chiang Mai, all 29 of us hopped in the back of back of four-wheel drive pickup trucks for the last 45 minutes up the muddy, potholed, mountain road.  Upon arriving, Han and Peter mentioned how much the school has changed since their first trip here, 5 years ago. Many new buildings, such as the girl’s dormitory, have been built, and new roofing has been installed on many of the classrooms. Since this is Westminster students’ last year here, we were told to think about what we expected the school to be like. In reality, it was much better than many of us would have thought. The school looked to be in good shape and because of that a lot of us were unsure about what work we would actually be able to do there. The digs were very comfortable.  We all slept in dormitory like quarters which we called the “Gum Drop Villages”, because it was two large rooms with gum drop looking bug nets over all of the beds.  We were very excited to get settled in for our next 5 days at the school.

In order to accommodate families living in more remote areas, Ban Toon Ting School is pretty isolated.  Although the school’s location is designed to serve the largest number of people possible, accessibility is still an issue because there isn’t organized transportation for the students.  Those who live the farthest away board at the school during the week, but others make the journey there and back each day.  One afternoon while we were staying at Ban Toon Ting, we walked with the kids to one of the villages that the school serves (about 1.5 miles away).  Just like in the U.S., once the bell marking the end of school rings, a mass of kids head for home.  A few get picked up by parents or siblings on motorbikes, but most are part of the horde walking.  All of the students were between kindergarten and 6th grade.  I was a little bit surprised by how small some of them looked.  They seemed far too young to be walking by themselves, but then I realized that the older kids were all looking out for the little ones.  As we walked with them, I was grabbed by the hand by a pair of second graders.  We picked flowers and jumped in puddles as we made the trek to the village.  As we passed different houses, kids peeled off and waved goodbye.  It was kind of like a big walking school bus. 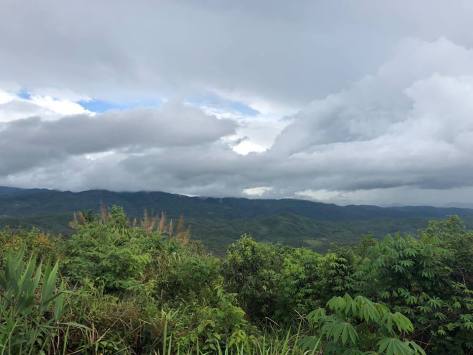