There are four main sauces that are paired with each meal, every chef will cook the meal to their preferences, then each person can personalize the dish to their personal preferences. At most tables you will see a four small bowls in a ring called Khrueng Phuang or ring of spices, nine out of ten Thai’s eating will automatically reach for one of the sauces before having their first bite and it is not viewed as disrespectful.

The first sauce that is widely used is dry chili powder, which is coarsely crushed and very potent. The second sauce vinegar with chili pieces, which is commonly used in noodle and congee dishes to give them a sharp tangy taste. The third sauce commonly used is vinegar with chili powder, which is commonly used in noodle dishes. The fourth dish that is commonly used is sugar. However, there are more than four common sauces, a few others include the fish sauce which taste awful by itself but no dish taste quite right without it. Nam Pla Phrik is fish sauce with thinly sliced phrik khi nu (Bird’s Eye Chili), a squeeze of lime, and garlic which is optional. This sauce is best with fried fish and rice dishes but it is also used as a common substitute for regular fish sauce. The last sauce is Nam Phrik Siracha which is a thick orange chili sauce that is mixed with red chili, vinegar, and sugar; most commonly used for seafood.

As with any culture, there are a specialized set of ingredients that are found in nearly all Thai dishes. Over ten different types of chili peppers are used to make sauces, as well as chili paste.  Although we as Americans may classify a chili pepper as a chili pepper, the Thai culture is very specific in the type of chili pepper, and only specific chili peppers may be used in specific dishes. Second to chilis, garlic is probably the second most common ingredient in Thai cuisine. Thais will smash the garlic, chop the garlic, or even use whole cloves for cooking. Shallots (small red onions) and ginger can be found in almost any Thai dish.  Siamese ginger is a larger ginger root that is generally used in curry pastes or sliced up to be added to soup.  Common ginger is added to beverages, any food, and commonly used as a condiment in beef dishes as well as Tom Yom. There are two different types of basil the Thai culture uses for cooking; sweet basil (similar to the basil used for Italian dishes), and holy basil.  Sweet basil is used as a vegetable, as well as for flavoring, while holy basil is used in hot and spicy Thai foods, most commonly in Pat Kaprao. Tumeric is a bright orange root that is used to color yellow curries. White tumeric is used as a raw vegetable. Cumin and nutmeg are both used to make curry paste. The most common oil to cook with in Thailand is palm oil because it is produced right in Thailand. Other oils such as safflower oil and peanut oil are much more expensive to cook with because they must be imported into Thailand. Interestingly, curry powder is not used in most Thai curries. Curry powder is used for Indian curries. 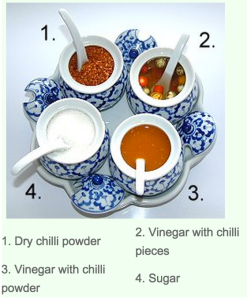